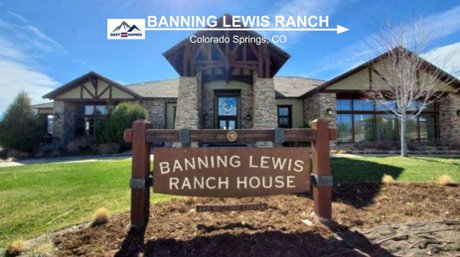 Banning Lewis Ranch is a well-renowned, highly sought, and one of the largest neighborhoods located in the Northeast Colorado Springs. Ruth Banning and Raymond Banning manage it.

It was 1988 when Colorado Springs when expanded to Lewis Ranch. It has a rich history of cattle farming. The entire area of Banning Lewis Ranch used to be a cattle ranch initially. It has more than 30,000 acres of land. At the beginning of the 20th century, this land used to be in full operation. The area was named “Banning Lewis Ranch” after the two owners.

Presently, Banning Lewis Ranch is one of those neighborhoods of Colorado Springs that has the top-class amenities of any other neighborhood. The recreation center of Banning Lewis Ranch was declared as the winner of the Gold Nugget Award of Merit in 2008. This award was for the best private and public recreational use facility. The presence of Junior Olympic Pool, Vista Water Park, and various other unique pieces of architecture makes this community the best among all other neighborhoods in the city.

Throughout the area, there are amazing trails that allow the occupants to explore and enjoy the beautiful natural surroundings of Colorado. There are parks and playgrounds in the area as well. You will also find several shopping centers near the neighborhood as well as many movie theaters, retail shopping, entertainment facilities, and restaurants situated in the Powers Corridor.

Banning Lewis Ranch has a charming and appealing uniqueness due to its beautiful qualities. These qualities and originality make this neighborhood stand out from others in the city. There are a lot of developments which are taking place in the area currently. The chances are that it will become one of the most expensive neighborhoods shortly.

If you think that this fantastic neighborhood with a luxurious lifestyle must be too costly, let us clear you that the price for homes for sale in Banning Lewis Ranch starts from $283,302 and goes up to $739,900. The average cost for sale is around $428,679. Thus, it is the price that is quite comfortable, and you can also style different features according to your desire.

There are also many primary schools in the community, such as Falcon School District 49, Falcon Middle School, Falcon High School, and Falcon Elementary. The neighborhood is also a part of the well-known Powers MLS area. The zip code of this region is 80927.

You will love this 3-story, 3-bedroom, 2.5 bath, 3-car home in Banning Lewis Ranch's low maintenance community. From the lower level family room you can walk out to the f...

Wonderful low maintenance ranch home in Banning Lewis Ranch right across from a private park! This home has been lovingly cared for and it shows! Beautiful laminate woo...

Welcome home! This ranch style home sits on a corner lot with open space and trails right across the street. Easy walking distance to the Ranch House, pool and tennis cou...

Come live in the desirable community of Banning Lewis Ranch! This home has a beautiful floor plan with an open kitchen that includes a gas range stove, granite counter to...

This like new home features 2294 sq. ft. of open living space, with 3 beds and 2.5 baths. The kitchen has beautiful quartz countertops, a large eat-in island, and a dinin...

Check out this BEAUTIFUL home located in the desirable master planned community of Banning Lewis Ranch! This home boasts an amazing open concept living space on the main ...

Wonderful move-in-ready 3 story home located in the desirable Banning Lewis! Walking into the home you will be greated with all the beautiful natural light that this prop...

Let me tell you about this BEAUTIFUL home in Banning Lewis Ranch on a corner lot, near a park. WOW!! Walking in you immediately feel how open it is. You can see yourse...

Check out this beautiful ranch-style home at The Retreat in Banning Lewis Ranch, a private 55 and better community. This home features an open concept living plan with a ...

The real estate listing information and related content displayed on this site is provided exclusively for consumers' personal, non-commercial use and may not be used for any purpose other than to identify prospective properties consumers may be interested in purchasing. This information and related content is deemed reliable but is not guaranteed accurate by the Pikes Peak REALTOR® Services Corp.

Need to Sell Your Home?